Three, to be precise.

This month, 20 people graduated in a lovely ceremony at Central King Country REAP in Taumarunui.

Eight people graduated at Central Plateau REAP in Taupo. This Graduation was a first for me as regional Coordinator - I was unable to attend, so Linda, Jude and I set up a Google Hangout, and I was able to be there virtually.  Apart from seeing some ceiling at times, and missing out the the exceptional food, it was very successful.

Several of the students were able to spend some time one on one with me to talk.

Worried about Cyberbullying? See what NETSAFE NZ is doing.


Netsafe has launched a new service in New Zealand to help combat increasing levels of cyberbullying.

From November 21st, if you are being bullied or harassed online, or know or suspect someone you know is the victim of cyberbullying, Netsafe provides a free calling service to offer help and advice.

This is great news for parents who are worried about the effects of bullying on their children, particularly online threats.

The free phone number is 0508 NETSAFE.

Please click on the link to read the full article, published by Netguide.

Mobile Wifi device to the rescue!

Recently, a Computers in Homes class was interrupted when the Hawera Star building where classes were being run was closed down after a recent earthquake.  We had two hours to remove everything from the building.

A temporary venue was found, classes were resumed and students graduated on schedule.

However, there was no internet access at the temporary venue.

So Ian Andrew, our Taranaki technician, set up a mobile pod of 11 laptops and sourced a mobile wifi device so students could access the internet and continue their learning.

TP-Link's AC750 (pictured) is able to connect up to 30 devices on the 4G network, and despite some limitations with concrete walls interrupting the signal, it runs surprisingly efficiently. 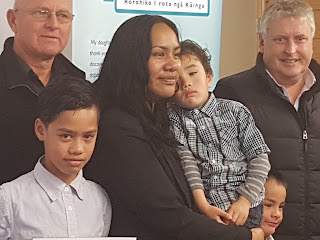 Everyone was happy to be taking their computers home, but no one was happy that the course was ended and they wouldn't be getting together again on Monday nights.  There were hugs and promises to keep in touch as Graduation progressed, while the kids were just anxious to get home to play on their new laptops or desktop computers!

Mayor David Trewavas popped in briefly to congratulate the graduates and present their certificates, and Barry Kerr, General Manager Central Plateau REAP spoke about how important it is for families to have access to the internet at home.  He said he was lucky to have had a great childhood and was able to complete a good education to help him get ahead in life, but sometimes, other people are not so lucky.  He congratulated the successful graduates for putting in the effort and time to do the Computers in Homes course for their children's benefit.  And, of course, for themselves.

For the first time, we ran a creche alongside the Computers in Homes course, and two remarkable ladies looked after several children while their parents learned how to use a computer.  Some of the parents told me that they would not have been able to complete the course if it wasn't for the creche.

Tutor Jude Sherning said that all of the students put a lot of effort into making a Powerpoint presentation, and several outstanding presentations were shown as part of the Graduation.  Jude recounted how, at the last class, when students were putting final touches on their presentations, all the children came in to show their parents their presentations!  It turns out that the creche ladies were also teaching the kids how to use a computer!  Unfortunately, we didn't get to view the kids' presentations!

Two new CIH courses have been offered at CP REAP for Term Four and registrations are open now.

Current Classes in Hawera and Taupo

We have two classes running at the moment - one at the Hawera CTC and the other at Central Plateau REAP in Taupo.

Both classes have only 3-4 weeks till Graduation, and everyone is working hard and looking forward to taking their computer home.

Another class is due to start in Taumarunui at Central King Country REAP in about two weeks.  Please contact CKC Reap if you live in the area and are interested in becoming part of our Computers in Homes family.

You are eligible is you do not have an internet-capable computer at home, if you have school-aged children living with you, and you or a member of your household has not already done a CIH course.

For those of you that do not know me, My name is Janey Hardy. I found out about the Computers in Homes course through a friend. I in turn told another friend and together with six other students we are all graduating today.  Firstly I would like to thank Ian Andrews and Christina Turner for there constant support and encouragement throughout these past 8 weeks.  Before I started this course I only knew one person apart from the coordinator Christina. But within the hours of 9:30-12 every Tues for 8 weeks I have not only learnt a lot about the basic operations of a computer, but I have made solid friendships with others in the same life situation as me. Trio, Kylie, Charlie, Chardon, Chilli, Toia, Sandra and myself have gained more than just a simple certificate in computing. We have gained the necessary skills needed to pass on the knowledge to our children, grandchildren, nieces and nephews.  So this course has not only been of benefit to ourselves but for our whole whanau.
Posted by neraKaren at 8:16 PM No comments: 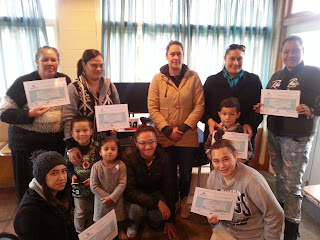 I was lucky enough to attend the Graduation for this class in Hawera today.  It was a brief Graduation. Christina and I spoke and one of the Graduates gave a good speech about her thoughts on the classes and about friendships formed.
Posted by neraKaren at 11:04 PM No comments:

This recent article from Netguide 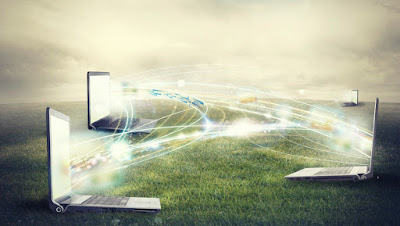 Spark has rolled out 4G across existing cell cites in the Taranaki region, the telecommunications firm revealed today.
The move enables Taranaki residents to have better access to Spark mobile coverage.
Colin Brown, general manager of Networks for Spark, says the vastly improved mobile network will allow locals and visitors to the area to stay constantly connected with family, friends and colleagues.
“We’re always looking to improve access to mobile coverage across New Zealand and we’re excited that Taranaki is now able to access the benefits of 4G,” Brown says.
Click for full story
Taranaki Reaps the Benefits
Posted by Boss lady at 5:55 AM No comments:

Two Computers in Homes classes in the Taupo area began training at the beginning of May.
Tongariro Area School in Turangi is hosting the class of ten families.  Their trainer, Dion Nurse, is very capable and popular.
Comments from Dion's students:
Ki a ora Christina and Dion,I have already learnt a lot in tonights lesson.Thank you. I am very grateful.In today's lesson I finished filling and signing the forms required. We talked about internet browsers, how to bookmark ( new to me), tabs, security when logging in. Thank you for the opportunity to learn. Engari, Dion, you are the bomb, churr for the tuition.Nga mihinui atu ki a koruaKia ora Christina.raua ko Dion. Nga mihi ki a korua.I wish to take this opportunity to thank you for the chance in advancing my knowledge to do with Computers.I need to keep up - especially with my grand children, and tertiary studies, as well as other areas.Looking forward to the challenge.No reiraHeoi anoWhaea

And in Taupo,  another nine families are training at Central Plateau Reap.  They are excited to learn more about how to use a computer and they and their children are looking forward to graduation day, when they can take their computers home.

On December 10th, 2015, eight people graduated from their Computers in Homes course. 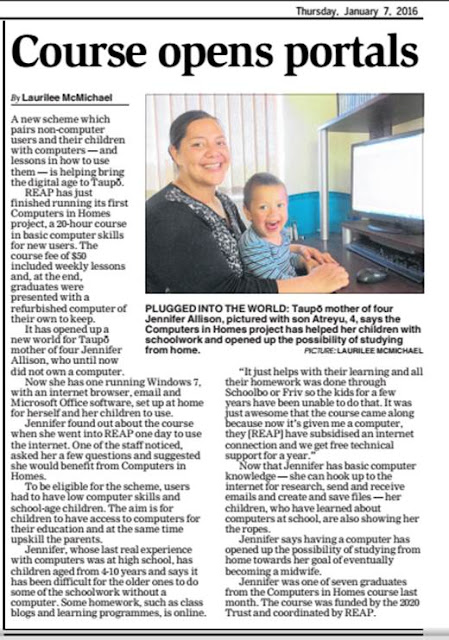 Why we need a computer (or laptop) to access the internet for learning.

Many low-income students use only their phone to get online. What are they missing?
by Crystle Martin 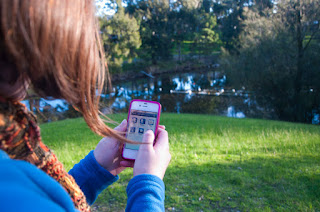 What do students miss when they access the Internet only through mobile devices?